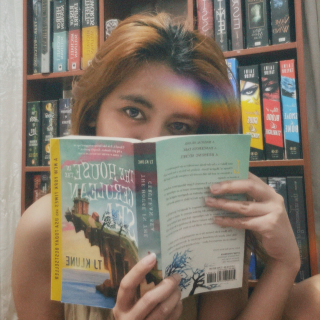 It has been A WHILE since I have posted here but today is very exciting cause it’s my stop for the #JadeFireGoldTour! 🎉

I have been chosen as one of the tour host for this lovely debut book and I would like to thank Caffeine Book Tours for this opportunity. Don’t forget to check the other tour hosts’ schedule with their content and reviews here. 💛

Girls of Paper and Fire meets The Tiger at Midnight in June CL Tan’s stunning debut, inspired by Chinese mythology, with rich magic and an epic slow-burn romance.

Ahn is no one, with no past and no family.

Altan is a lost heir, his future stolen away as a child.

When they meet, Altan sees in Ahn a path to reclaiming the throne. Ahn sees a way to finally unlock her past and understand her arcane magical abilities.

But they may have to pay a far deadlier price than either could have imagined.

Ferocious action, shadowy intrigue, and a captivating romance collide in June CL Tan’s debut, a stunning homage to the Xianxia novel with a tender, beating heart, perfect for fans of The Bone Witch and We Hunt the Flame.

“Forgiveness is not weakness. It requires more strength than you think, my boy. You may not be able to change the past, but with each action, you can change the future.”

I haven’t read a YA fantasy book in awhile and when I saw the tour sign up of this on Caffeine Book Tours I debated if I would go through and try it. YA fantasy nowadays are a hit and miss for me but THIS was very much up my alley.

I started this book on the 10th of October and with me not getting into YA fantasy fast enough thought I wouldn’t be able to finish this by the time of my tour stop. But lo and behold I finished it in 3 days. That was how hooked I was with this book.

Jade Fire Gold focused around two characters, Ahn and Altan. Characters with very different backgrounds and personality but ironically tied together by the red strings of fate.

Ahn was a peasant girl who dreamed of living her desert town to explore the world but is keeping a secret from everyone while Atlan, the heir of the throne who everyone thought was dead, has set his mind on taking his revenge on the people who took everything from him.

The main thing I would like to comment was the writing style. I am very particular when it comes to the pacing and how an author describes a particular plot and/or setting and I was very satisfied with how this all turned out in this book. It also made me feel like I was there and at times I didn’t want to stop and just keep on reading.

Another thing I want to point out was the characters. Having a set of characters you can feel connected and attached to for me is one thing every book has to have. Ahn, Altan, Tang Wei, Linxi, Leiye, Shifu, Ama were characters I would remember for a long time. Every emotion they felt I felt as well. Happiness, anger, sadness, disappointment, forgiveness, love and even betrayal. It was also very engaging with both of the main characters perspective. From the start of the book you’ll learn and discover things in their life on the same pace and I felt like even though we were back and forth on the 2 perspectives nothing was left out.

The magic system was very interesting for me aswell and I felt Avatar vibes while reading it since it does focus on elemental magic which… I am not complaining. I also loved how Chinese mythology and history was intertwined with everything and everyone all throughout the book.

One thing I felt a little down about was how fast everything was at the last battle. I felt like it needed more impact after everything the characters have been through but overall it was a satisfying finish but that EPILOGUE though! I mean at first I thought this was a stand alone but now gurl… I need a sequel.

For me this was a very successful debut. Everything from the characters, world building, magic system, history, Chinese mythology, writing style, pacing was very well thought of and I can see how much the author spent the time and effort to make the story come to life. I loved and enjoyed every bit of it and I highly recommend this book.

June CL Tan grew up in Singapore where she was raised on a diet of classic books and wuxia movies, caffeine and congee. She holds various degrees in communication studies, education, and film. After teaching for a few years, she took a detour into the finance industry. To no one’s surprise, she soon realized her mistake and made her escape. Now, she resides in New York City, talking to imaginary people and creating fantastical worlds under the watchful eye of her crafty cat. She enjoys telling stories that draw on both the traditional and modern to create something fresh to the eye, but familiar to the heart. Jade Fire Gold is her debut novel.

Hi guys! Today is a very exciting day for me because I have been chosen as one of the tour host for LaKase Cousino’s debut fantasy novel “Across the Broken Tide”!

This is my very first book tour and I want to thank Caffeine Book Tours for selecting me to be part of this tour. Don’t forget to check the other tour hosts’ schedule with their content and reviews here. 💜

In a world where the politics of court determines the future of every person in the kingdom, Dima has maneuvered her way not only into the good graces of the caliph as a tutor for his daughters, but into the heart of his son. However, when a prank goes a step too far, the childhood friends are separated in an effort to force them to grow into the people they are expected to become.

When a simple journey turns into a kidnapping, Dima is thrust into a strange land and must rely on a dark magical power that had been long buried in the sands of her home. But as her magic grows stronger and the tides of her new home rise, so do her darker temptations.

Caught between her heart and her magic, she finds herself struggling to choose who she will become. Through interactions with vikings, pirates, magical creatures who only speak in riddles, and forces hellbent on controlling everything she holds dear, Dima must discover who she is beyond the politics of the royal court.

“We all pay a heavy price when we live by duty instead of love.”

Across the Broken Tide is about a girl named Dima from Cordoba who is focused on fulfilling her duties and making the people who looked after her proud and never disappointed. Little did she know that once she leaves her comfort zone a whole adventure is awaiting her.

What I really loved about this book and what captured my attention completely was all the characters with such different colors, nationality, cultures, beliefs and personalities coming together and doing everything they can to prove what they believe in and face challenges together without bringing anyone down.

The character development of Dima was the most satisfying of all for me. From being the girl who only follows and does what is told and expected of her to being the brave and independent character she truly is made everything so much better and made her whole journey worthwhile.

This story was filled with adventure, action, love, acceptance, betrayal, loyalty, family and friends that will leave you at the edge of your sit and wanting to read more. It was beautifully written with a mix of mythology, fantasy and multicultural aspects with such beautiful landscapes and magical creatures that will both trigger your imagination and make you feel like you’re actually there with all of them.

(The part where the title was mentioned was an A+ with matching goosebumps experience for me. And that fight scene and ENDING! In need of the sequel as soon as possible! 😅)

I wouldn’t wanna say anything more cause I feel like it’s better to go into the story not knowing much and being surprised along the way. Highly recommended especially for people who love to read about cultures that are different from their own.

LaKase Cousino is the author of historical fantasy, a musician, and Medieval History obsessive from the Midwest. Her debut novel Across the Broken Tide is forthcoming from Written in Melanin Publishing. When not writing, LaKase can be found reading about the 10th century or playing fetch with the family dog Ife.